Go to content
Victoria's War's
An Introduction
Fifteen wars between 1857 and 1899
In his excellent book on Empire, 'Unfinished Empire' John Darwin begins his chapter on 'Resorting to War’ by referring to a War Office report of 1902 which stated that there had been fifteen wars between 1857 and 1899. This  tally only included the conflicts which involved more than 3,000 British troops. It did not include all the minor conflicts and skirmishes. It did not include the Boer War which involved the use of up to 450,000 troops from the empire. The British Empire in the Victorian era claimed that it was an empire of liberty that brought civilisation to native peoples. The empire did bring benefits for some but the changes imposed on the many often brought resistance.
The empire increased in size from over 2 million square miles to some 12 million square miles  during the Victorian era and this was done largely through the use of war or the threat of war. After territories had been conquered through the use of violence then the violence did not stop there for often there was resistance which had to be put down, often the result of rulers realising what were the realities of signing treaties with the British. Even after resistance had been put down and a native people had been taught that there was little hope of success in resisting, the violence continued either directly or indirectly. 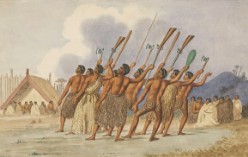 The Maori Wars of the 1860s came about as a result of pressure from settlers for more land to be made available to settlers.
All empires are sustained by the use of and constant threat of violence
It is the case that all empires are brought about and sustained by the use and threat of violence, and dealing with resistance is expensive. In an age of free trade and few direct taxes, war was an expensive option for the British government. To keep the cost of war down the British resorted to a number of policies. Where possible they tried to appease local settlers by granting self rule but where this was not desirable and there was more likelihood of resistance they used local militia or local natives in the army.
For much of the c19th, communications between the Colonial Office or the War Office and far away colonies was difficult so that decisions were often made by the men on the ground - the local Governor appointed by the Colonial Office or the Commander-in-Chief of the local forces. Consequently many of the wars of conquest were the result of decisions made by the men on the spot with London being told afterwards and having to defend a decision made for them. Sometimes there would be fierce opposition within parliament as a result of decisions taken by far away officials as when Parliament condemned the attack on Canton in 1857 and Cobden's motion of censure was won but usually decisions made by Governors and generals were accepted.
Why so many wars?
The Victorians saw their Empire as a force for good - a moral and improving empire that was different from all other empires. Even foreigners came to believe that the British Empire was different. Baron de Coubertin believed that the British Public School system prepared its students for duty and work in the Empire in a way that no other empire could manage. Subsequent British generations well into the 20th century have accepted this view of the Empire as an improving force and that we left colonies well placed to cope with the late 20th century, and that wherever the British went they were welcomed not as conquerors but as people who devoted themselves to the civilisation of others. Where there was resistance, and there was a lot of resistance, the British claimed that rebels and protesters represented the minority and that British government was for the good of the people and most of the population recognised that. The belief that Britain had a ‘Mission to Civilise’ came about because of the industrial and economic ascendency that Britain enjoyed in the middle of the Victorian period and the importance of  the evangelical movement which was so influential at the time. Britain was the workshop of  the world at the time of the Crystal Palace exhibition in 1851 and this feeling of superiority led the British to believe it was their divine duty to found colonies in order to develop backward peoples, whether native peoples wanted to adopt British imperial values and systems or not.

The British 'Mission to Civilise' was a myth
The view that the British established colonies to civilise the world  though is largely myth. There were large numbers of missionaries all over the world working for various missionary organisations and they believed they were working to improve the lives of local people but when it came to a divergence of view between local colonial authorities and the wishes of missionary groups it was the colonial authorities who usually got their way as when the British government gave Cecil Rhodes a private charter to govern and control the land of the Matebele against the wishes of the Matabele people.
Violence accompanied every aspect of the British Empire
The annexation of land and the creation of colonies was nearly always accompanied by violence which did not stop once a territory had been conquered militarily. Once a British administration had been formed there was nearly always resistance to the changes that were introduced. Colonies existed mainly to support and enhance the British economy and this meant adapting to alien economic structures. Agriculture had to become efficient and produce for export. This often meant local cultures had to change and with the change new laws were introduced together with a new judicial system. Such change often brought continual resistance. 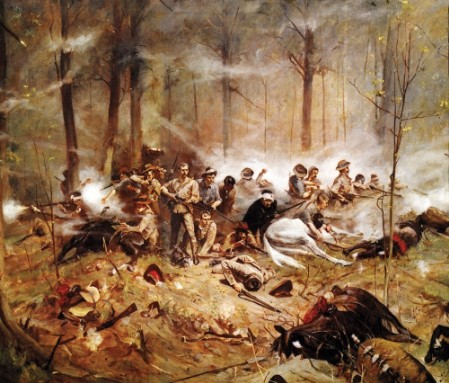 The Battle of Shangani Hill took place during the first Matabele War in 1893
Types of Resistance
Resistance took many forms. There was resistance against any influx of European settlers who usually wanted to take the land of local people and then continuing resistance against the introduction of a new culture. There was resistance in colonies with little European settlement against the rule of the metropolitan power as in India. There were cases of resistance by white settlers against the direct rule of London for colonial authorities usually had different views on how relations with local people should proceed. the demand for more and more land was a constant source of conflict between colonial authorities who wanted more land for incoming settlers and the metropolitan power not wanting to have to pay out money to defend colonies against rebellions by local disaffected people. Resistance also accompanied decolonisation although that aspect of resistance does not concern us here as we will focus on those rebellions that took place between 1815 and 1914. Some of these rebellions are well known like the Indian Rebellion of 1857, the Maori Wars of New Zealand and the Opium Wars but there were numerous  other examples of resistance to the British Empire and consequent violence used to suppress the resistance.
For Victoria's Wars 1843-1860 click here
For Victoria's Wars 1860-1899 click here
Back to content