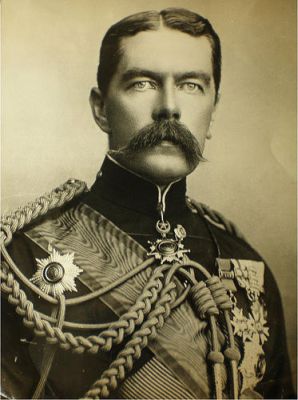 In December 1900 Kitchener replaced Roberts who returned home. On the face of it his task looked quite simple - he had 210,000 troops in south Africa whilst the Boers were down to at most 60,000 (including rebels from the Cape/Natal and foreigners), of whom only a third were in the field at any one time. But half of Kitchener's troops were guarding lines of communication and thousands more were on garrison duty. There was still a dearth of mounted troops, especially as many of the local yeomanry had gone home, particularly of troops able to go long distances in the saddle, sleep rough and endure extremes of climate.
Kitchener viewed the Boer as a savage and believed the Boer wife had a particular role in extending the war. for him the Boer was 'an uncivilised Afrikander savage with a thin white veneer. Kitchener wanted to send Boer women overseas as happened to the men, but he was overruled by the Cabinet.
What Kitchener did do was to turn the unofficial refugee policy of interning those burnt out by farm burning into an official internment policy. He had no idea of the full implications of this policy-what medical facilities and doctors and nurses would be required and what kind of accommodation should be provided. British soldiers would now embark on a policy of laying waste to large areas with the Boer population rounded up and imprisoned. This created a huge crisis in the camps. 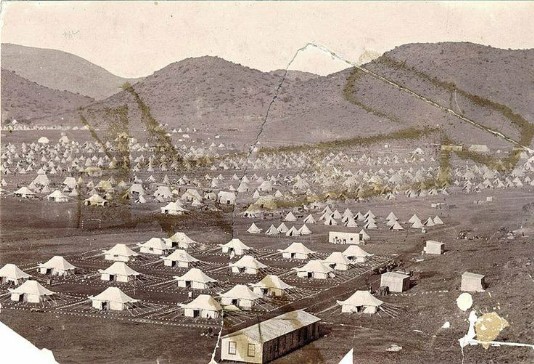 Bloemfontein concentration camps
The policy of internment tied up British troops and ensured a long lasting resentment against Britain. it also freed the commandos from the responsibility of looking after their families.
Great Drives
In January 1901, the first of Kitchener's great drives took place. General French, commander of the operation had 21,000 troops at his disposal  organised into seven columns. Five were placed along the Johannesburg-Pretoria railway, and two more columns were to descend on the same area as these columns were making more-eastern Transvaal where they hoped to trap Botha's force. 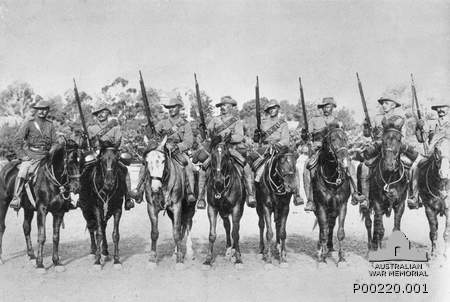 Mounted Infantry formed the basis of the drives to round up Boer guerrillas
As the columns moved eastwards they were ordered to destroy farms, stock, bakeries, mills, wagons and transport the inhabitants to internment camps. An area of over 10,000 square acres was to be laid waste-a huge area. 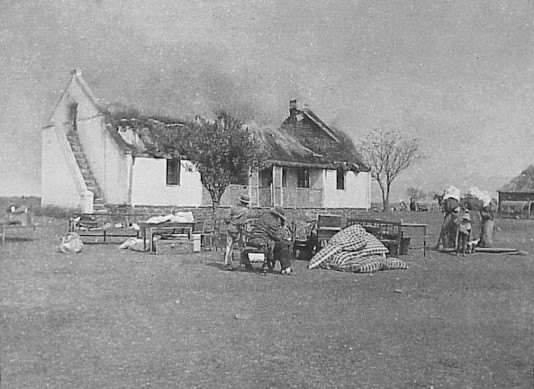 Boer farmhouses were burnt and the families interned in concentration camps 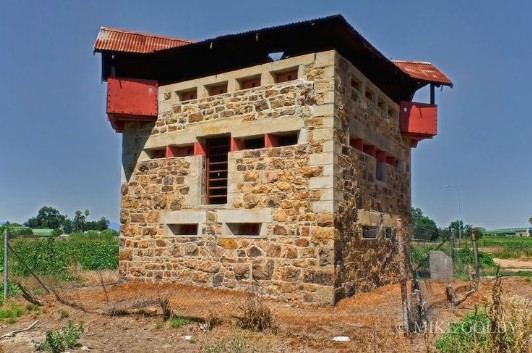 Blockhouses were built along fortified lines into which the Boers were to be driven
As the columns converged on Ermelo and with Botha seemingly trapped in a 10 mile arc he was able to escape by selecting a weak spot in the British lines and charging through it in the dead of night. Botha, De Wet and De la Rey were always able to escape these drives by slipping through sleeping outposts or just directing their forces at a perceived weak point. To make it more difficult to escape through these lines Kitchener came up with the idea of blockhouses.
In December Kitchener took the decision not to take in any more Boer civilians but to leave them on the veld to their own devices. The Boers increasingly felt responsible for them. In conjunction with the blockhouses Kitchener organised a series of drives whereby columns of soldiers would drive the Boers into the lines of blockhouses to try and trap them. The first of these drives happened in February 1902. At nightfall on Feb 5, Kitchener had 9,000 men drawn up in a continuous cordon of 54 miles between Frankfort and Bethlehem-one man for every twelve yards.
The Drives of 1902 began to take their toll
The drive began the following day and was to move 20 miles a day. There was never before such an enterprise-the dressing of 9,000 men  in perfect alignment with another 8,000 men guarding the blockhouse lines against which De Wet would be hopefully pushed. De Wet was considered the main prize but as so often before he evaded every attempt to trap him. In the drive of February, 1902, 800 Boers were captured including De  Wet's own son. For many British officers the drives had all the hallmarks of a pheasant drive or a tiger shoot. With more and more drives taking place the weekly bag in early 1902 was often near 1,000. But whilst the drives were taking place in the OFS and Transvaal General Smuts was striking boldly into the heart of Cape Colony and there was still the occasional successful guerrilla operation as when de la Rey captured Lord Methuen on 7 March at Tweebosch.
The combination of scorched earth, blockhouses, barbed wire and offensive drives was taking its toll and the Boers were exhausted. It was taking all their efforts to just evade British troops who seemed to be everywhere and the inevitable happened in May when, on the initiative of the Transvaal government, the Boer leaders met at Vereeniging, south of Johannesburg, to discuss peace terms.
Blockhouses
The final part of Kitchener's plan to defeat the Boers commandos, was put into place following the failure of the peace talks held with Botha at Middelburg on 28 February 1901. With the watering down of Kitchener's plan by Milner and the government, Botha had no option but to reject what was offered to him. Kitchener now had to think how to end the war. There were still, his experts were telling him, 20,000 Boers still at large.
Kitchener began by reducing the rations in the concentration camps for Boer prisoners by way of punishment and then turned his attention to rounding up the remainder of the Boers at large. The answer for him lay in two new weapons; barbed wire and the blockhouse. The blockhouse, built of tin and concrete, had been originally introduced in South Africa to defend the railway system but Kitchener now hit upon the idea of creating a mesh of barbed wire and forts across the country with barbed wire alternating with blockhouse forts. By the end of 1901 the country was criss -crossed  by barbed wire and recently designed blockhouses which consisted of two layers of circular, corrugated iron  with the gap in between filled with earth and later hard shingle. In all about 8,000 were built with blockhouses linked by wire to the next blockhouse 1,000 yards away and linked also by telegraph and telephone wires. Eventually the blockhouses were garrisoned by 50,000 British troops and 16,000 African auxiliaries. The Boers found that space was gradually being denied them. The lines could be breached but it was more and more dangerous to do so.
Peace
In April 1902 the British and Boers resumed talks that had got nowhere in 1901. This time with the war having become more bitter and conditions for the Boer commandos and their families quite desperate the talks would reach a conclusion. As with the previous year there would be divisions between the civilian and military authorities with Milner wanting an unconditional surrendered so that south Africa could be rebuilt in a way that would leave the British the dominant force. Kitchener felt that the Boer leaders had to be accommodated in some way. 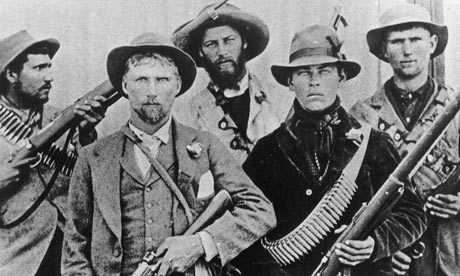 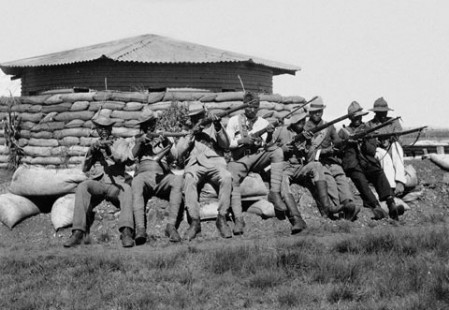 British soldiers defending a blockhouse
Boer leaders meet at Klerksdorp to discuss their situation
On 9 April representatives from the two Boer governments met at Klerksdorp and the generals gave an appraisal of their situation. They reported of shortages of food, hostilities with the Zulus and dwindling space in which to operate. They talked about the blockhouses were denying them access to food areas. Steyn talked about surrendering unconditionally and meaning by that that he would not feel bound by the eventual terms. This information got back to Kitchener and he used it to justify the terms he wanted.
A recent Boer victory in which Methuen had been captured at Tweebosch encouraged the Boers to believe  that they could continue but they failed to get the British to agree to take off the point that required them to surrendered their independence. De Wet, who might have spoken for the continuance of the war, spoke of having reached the bitter end, and with that there was an acceptance that they must sue for peace, but on the basis of not having been defeated. In fact there were still 7,000 fighting men at large in the OFS and 12,000 in the Transvaal. The leading Boer commandos were still in the field but they had lost half their fighting strength in the previous year. The Boers did not regard themselves as having been defeated and asked for terms in which the Boers would retain their self respect. The British government though would not entertain the notion of the Boers retaining their independence.
Back to content