Go to content
Should the British Government pay compensastion for the victims of imperialism? 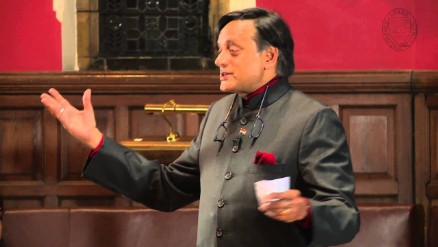 Dr Shashi Tharoor
A Reparations Debate in Oxford
On July 24, 2015 the Oxford Union held a 'Reparations Debate' and one of the speakers was an Indian MP Dr Shashi Tharoor (above) who said that India deserved reparations in principle for what he described as the looting by Britain over a 200 year period. His words were supported by the Indian Prime Minister Narendra Modi who said that Tharoor's words reflected the feelings of patriotic Indians.  Tharoor went on to describe the famines of the c19th and c20th in which 15-29 million died as a result of British policies and blamed Churchill for the deaths of four million Bengalese following his diversion of essential supplies from civilians in Bengal to British soldiers.
He quoted Churchill as having said that, 'the starvation of underfed Bengalese mattered much less than that of sturdy Greeks.'
The British Government has  acknowledged the atrocities in Kenya
In recent years the British government has acknowledged the atrocities that happened during the Mau Mau rebellion in Kenya (1952-1960) and has begun to pay compensation to victims of British torture. The rebellion began as a violent campaign against white settlers in 1952 and was eventually put down by the British colonial government The Kenya Human Rights Commission says that 90,000 Kenyans were executed, tortured or maimed during the rebellion and that 160,000 people were detained in appalling conditions.
Between 1952 and 1956 Kenya was effectively a police state with the Governor declaring a State of Emergency. Of 1499 people convicted of capital offences under Emergency regulations, 1070 were executed. When fighting was at its fiercest British soldiers, white Kenyan settlers, African soldiers and 'loyalist' Kikuyu 'Home Guard' all committed atrocities, as did their Mau Mau opponents. On 3 March 1959 eleven Mau Mau detainees were beaten to death by their British guards in what has since become known as the Hola Camp Massacre.

A British concentration camp in Kenya
The British Foreign Secretary, William Hague announced in 2011 a payout of £20 million for the victims of British torture, saying that the government' sincerely regrets' the abuses that took place, and the construction of a permanent memorial to the victims to be placed in Nairobi. Mr Hague though made it clear that the government was not legally liable for the actions of what was a colonial administration in Kenya.
Prime Minister visited Amritsar in 2013
Two years later in February 2013, David Cameron the British Prime Minister travelled to Amritsar, India, to visit the scene of the British massacre of 1919 when 379 people were shot dead by British forces and 1500 wounded - all from just 1650 rounds of ammunition. He was the first British Prime Minister to visit the scene of the massacre which had marked a turning point in the movement for Indian independence.
Amritsar in 1919 as the centre of much anti-British sentiment the result of Muslim concerns about British intentions for the caliphate, distress as a result of the recent flu epidemic, inflation and general concerns about the future of the Middle East. General Dyer who had 1,100 troops under his command was determined to restore British rule in the area and quell all disturbances. Arriving in Amritsar he found that there were over 100 terrified  European women and children crowded into the fort and that there was looting and further murders of Europeans. A British missionary was brutally attacked by Indian youths and Dyer was determined to teach the local [population a lesson and bring the city back under British control. He gave orders that there were to be no mass meetings and when he heard of a meeting taking place in a large public square he determined to take action. There were between 15,000-20,000 in the  Jalianwala Bagh when Dyer and his Gurkha forces burst in to the square surrounded by a wall and with just a narrow entrance. He ordered his men to open fire without giving a warning and the accurate firing had a devastating effect. Dyer left the scene without providing any first aid to the wounded.
Dyer believed that he had saved the Raj and when the news eventually trickled back to Britain the popular view was that he had indeed saved the Raj and taught an important lesson. Eventually following a report on the affair, Dyer was sent back to Britain on sick leave. On arrival he was interviewed by the Daily Mail and he expressed no remorse for his actions. He was then forced to resign his command but a campaign by the Morning Post raised 26,000 for him in recognition for his 'prompt and stern measures' which had the effect of having saved India. The matter was debated in the Commons and he had much support by MPs who regarded him as a man who had done his duty. The government though condemned him believing that India could only be ruled with the goodwill of the Indian people.
No Apology forthcoming for Amritsar
Despite the brutality of what had happened and the condemnation of the British government at the time, David Cameron would not go as far as making an apology. He said the right thing to do was to remember the events, acknowledge what had happened, show respect for the victims and learn the lessons of the past. Although he described the massacre as 'a truly shameful event' he did not believe that it was appropriate to apologise on behalf of a government that was in office 40 years before he was born. 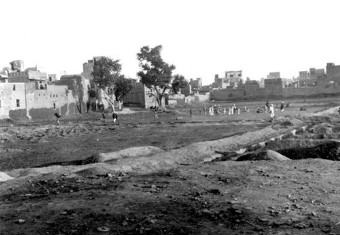 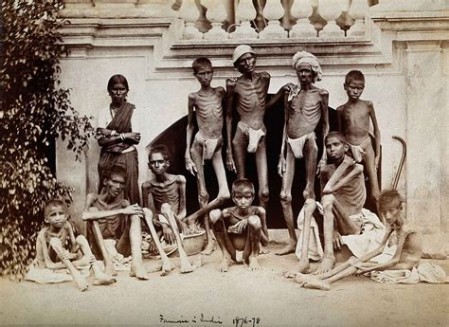 The 1876 famine in India
Famine in India caused by the Reluctance of Britain to take Action
In 1876 and 1877, inadequate rainfall from Mysore to the Punjab led to food shortages which affected 58 million. The government was reluctant to interfere with the market and failed to deal effectively with the situation. Moreover railway lines did not go to the most affected places so help did not get to those who most needed it. there was official relief but the amounts given were based on the rations a Bengali prisoner would eat and were totally insufficient for farm labourers.
Work camps were set up but thousands died trying to reach them. In the Madras Presidency alone, some four million died. Irrigation schemes (10 million more acres under irrigation) and more railways (25,000 lines of railway in 1900) were built but in 1895 and 1896 there were delayed monsoons which led to 53 million facing starvation. 33 million were kept alive in government camps but the Viceroy did not believe in interfering with the market and he did nothing to stop the hoarding of grain or the export of grain to Britain. 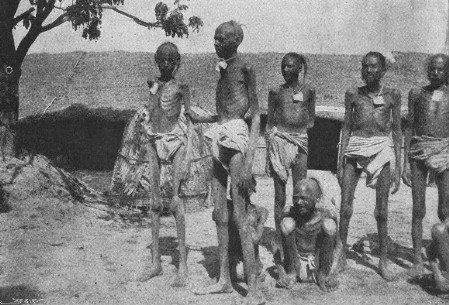