The Asante had a well organized empire that covered over 100,00 square miles
The Asante were the most cultured tribal grouping on the west coast of Africa. By the mid-c19th the Asante controlled an area of about 100,000 square miles and a population of two to three million. It had a well ordered administrative structure with towns within a fifty mile radius taking part in the government of the area by serving on the king’s advisory council. All trade was organised by state agencies and there was a state bureaucracy to govern and collect taxes. The roads of the Asante were well maintained and having an economy based on gold, the kingdom was wealthy. 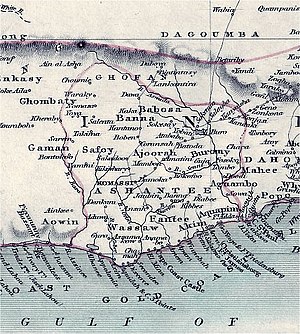 The Ashante empire in west Africa was spread over 100,00 sq miles and included up to two million people.
The Asante emerged as the stongest state in the Akan region
According to the website ‘Modern Ghana’ “the most prominent historian of Asante, Ivor Wilks, has suggested that  while some farming on a very limited scale had probably been practiced in the Ghanaian forests for millennia, only when the Akan began importing slaves in the 15th and 16th centuries were they able to shift from an economy which relied primarily on hunting and gathering to one which became primarily agricultural. As this transition to agriculture took place, Akan communities not only planted more of their traditional crops - plantains, yams, and rice - but also adopted a wide variety of new crops from the Americas, including maize (corn) and cassava, which were brought to Africa by Europeans. Farming led to rapid increase of population in the forest region. As the population grew, small groups migrated across the Ghanaian forest, searching for good farm land.'' Often these groups were led, believes Wilks, by entrepreneurs who used slave labour to do the initial work of clearing forest. ''Later, these entrepreneurs would invite free settlers to join them, and in this way new communities were created throughout the forest. These developments set the stage for state-building in the 17th and 18th centuries.”
In the c16th there were at least 38 states in the Akan region (largely southern modern day Ghana) but by the c18th there was only one state, the Asante and they reigned supreme in the region until confronted by the British in the mid-19th. It was Wolseley who led a British force against the Asante in 1873 that destroyed the independence of the Asante and eventually led to the British colonising the land now known as Ghana.
The Asante had a fearsome reputation as fighters and resented the British presence along the coast of west Africa. There was a thriving economy based on gold, slaves and agriculture before the Portuguese arrived in 1482. Slaves were acquired by the Asante to work their fields and much of the original slave trade was between European slave traders and African purchasers. Only later did the Europeans begin to send slaves to the Americas and by the time that the British abolished the slave trade (for their ships) at least twelve million Africans had been sold to American masters.
The Portuguese were to first to establish trading forts but it was the British who came to control the coastal region
The Portuguese were the first to establish a trading fort on the west coast of Africa but as the British came to dominate the slave trade and indeed trade generally to and from west Africa they began to take over forts established by other European powers and regard the coat as a British protected area. There were periodic attacks on these forts by the Asante and following attacks on the ex-Portuguese fort of Elmina, the British decided to respond. Gladstone was reluctant at first to send an expedition to west Africa as the area was known as a mass graveyard  because of the various diseases. The humidity and heat made malaria a common problem for the British and although quinine was now available, the mosquito was not identified as the carrier of malaria until 1898. Despite Gladstone’s reluctance to engage in colonial wars, he eventually agreed. The Colonial Secretary, Kimberley, invited Wolseley, fresh from his success in Canada, to submit a plan. Wolseley recommended sending a group of officers to the Gold Coast to reconnoitre the area and assess the strength of the British garrison there and organise the raising of a local militia to drive the Asante back to their own territory. The plan was accepted by Kimberley and Wolseley was given command on 13 August. Having chosen his own officers Wolseley left England from Liverpool on September 12. 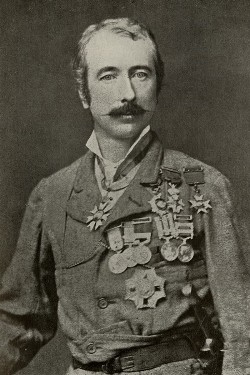 Wolseley would make his reputation in his battles against the Asante
Wolseley arrives to launch an expedition against the Asante
Arriving at the Cape Coast Wolseley found just twenty two British soldiers fit for duty from the garrison of a hundred and thirty and there were just four days of supplies. In the armoury there were just four hundred Lee Enfield rifles and nineteen Snider rifles. Enquiring about the nature of the terrain further north, Wolseley discovered that there was little known about the area and no maps available. Wolseley had hoped to build a railway into the interior but did discover that the interior was a land of deep gullies and hills – not at all suitable for a railway.
A feature of this campaign was that correspondents would accompany the expedition. There were some famous names among those correspondents who accompanied Wolseley who tried to ensure that they had everything they needed. There was Winwood Reade of the Times, GA Hentry for the Standard, Melton Prior for the Illustrated News and Henry Stanley for the New York Times. Wolseley realised the importance of the new journalism and the audience of these journalists who provided favourable reports of Wolseley’s leadership and the nature of the operations.
The British actions were to read like the exploits of a later Henty novel as the British soldiers were portrayed as knights in armour fighting to extend the empire and civilisation whereas the Asante were shown as barbaric and devoid of culture.
On 13 October representatives from Wolseley informed King Kofi of the Asante of the terms for peace. He was to withdraw from the British protected area by 12 November, release all prisoners and pay an indemnity of gold. The king was also told that if he refused the terms then the Asante would be removed from the British protected area, his won territory would be invaded and his capital Kumasi destroyed.
The Asante were more than a match for Wolseley's native auxiliaries
Wolseley began his campaign against the Asante by removing them from the coastal villages that they controlled. He did this by using locally raised militia from the Hausa and Fanti tribes but discovered that although the aims of the initial campaign were achieved, the  coastal tribes were not good fighters. Wolseley regarded the Hausa as having plenty of pluck but wild and the Fanti as being cowards. He thought the Asante as brave and worthy opponents. Consequently Wolseley decided that he should needed to use the British troops that he had been promise should he need them.
To try to minimise any British losses, Wolseley made certain preparations. He had special uniforms devised that were loose fitting, he had cork helmets designed and he ordered that quinine be taken before each day’s march. Wolseley had a road built to cover half of the journey to Kumasi with resting places with huts on stilts  and hospitals. The desertion rate amongst the natives building the road was such that the campaign got behind schedule. The Fanti and Hausa were used in the initial skirmishes and succeeded in forcing the Asante to retreat. During this early stage of the campaign Wolseley had to be carried on a wicker sedan chair as his leg with the wound from the Crimean War was hurting too much. During this early stage the British troops we kept aboard ship and sent on a little cruise to keep them away from the malarial coast until they were needed. 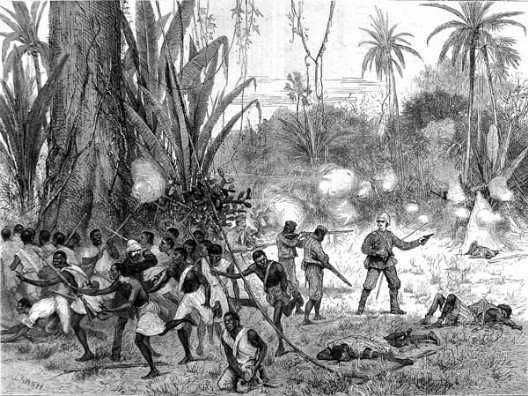 Once the main part of the campaign started, Wolseley divided his forces into four columns with the British troops in the central column led by himself. He was criticised for dividing his forces and putting the lives of the men under his command at risk by Winwood Reade. Just over five years later Chelmsford was heavily criticised by Wolseley by dividing his forces into three columns in south Africa but the difference was that Wolseley got away with it whilst Chelmsford had one of his columns completely destroyed at Isandhlwana.
Wolseley may have divided his troops into three columns but he kept the regular British troops together under his command together with the West Indian troops. When King Kofi sent a messenger to Wolseley’s camp to find out what the peace terms were Wolseley kept the messenger in his camp for four days and demonstrated his new Gatling machine gun to them. 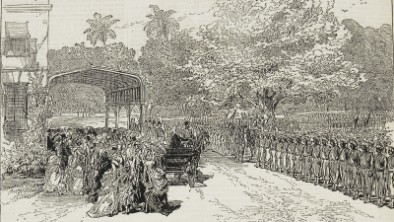 The West Indian troops who fought with the regular British trrops under Wolseley's command
On the 20 January Wolseley’s force crossed the Prah river and entered the bush. Conditions were difficult and malaria spread through the troops. The king did not give battle but retreated slowly gathering his army together at Amoafu for battle. The battle when it came on January 31 lasted all day with 5000 Asante massed against 2,200 British regulars and native levies. The British fought with a square which was not broken, and eventually with British firepower proving too much for the Asante, they took to attacking the baggage train at the rear. 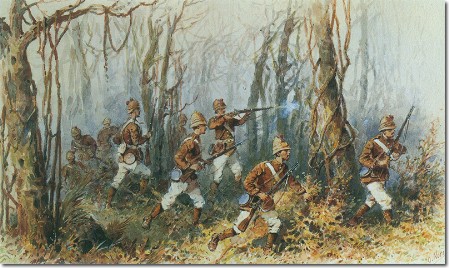 The 42nd Highlanders led Wolseley's flying column to take Kumasi
Kumasi taken and then looted and burnt to the ground
Wolseley then took the decision to send a flying column with soldiers just having two days rations. This force got to within eight miles of the capital Kumasi but was held up by having to cross a river. Eventually Wolseley decided to take a risk and sent the Highlanders on ahead to rush the capital. At 5.30 on 4 February the Highlanders entered the capital to find no trace of King Kofi who had fled. The town was then looted and set on fore with the king’s palace destroyed by gunpower.
Wolseley was anxious to get back to the coast and did not spend too long in negotiating with King Kofi once he had surfaced. He arrived back at the coast on 19 February and after the lot had been auctioned, with Wolseley buying a sliver teapot, and the king’s sword and orb, the army sailed back to Portsmouth.
Wolseley was promoted to Major-General with the war, the first to be fully reported in the press, regarded as  a great success. The Asante had been defeated on their own ground with relatively few casualties. At a review of the troops in Windsor Great Park, Wolseley was invested with the Grand Cross of St Michael and St George and made a Knight Commander of the Order of the Bath. His reputation was secured when in 1879 Gilbert and Sullivan modelled the main character in ‘The Pirates of Penzance’ on Wolseley.
Back to content