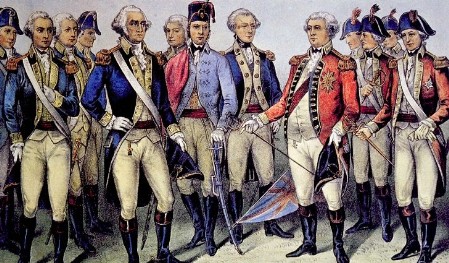 General George Washington accepts the surrender from General Cornwallis, following the seige of Yorktown
The surrender of General Cornwallis
On 17 October 1781, General Cornwallis and his British army, outnumbered and isolated in southern Virginia surrendered to General Washington American forces. The surrender meant the loss of the thirteen American colonies and changes to the nature and focal point of the British Empire.
British power in the American colonies had evaporated over the previous seven years at a time when Britain faced a threat to its very existence that it had seen rarely in its history.  It had few friends and found itself at war not just with the American rebels but also France and Spain. Its forces, both military and naval, were outnumbered and lacked leadership. At a time of national emergency the country lacked decisive leadership as the King and government vacillated  between a policy of conciliation and repression.
Real power lay with colonial leaders
By 1774 real power in the Americas lay in the hands of hard line supporters of Congress, the colonial leaders who resented British rule and taxation. By April 1775 local committees of these men had superseded the Governors of New Jersey, Pennsylvania, Maryland, Virginia and South Carolina and Britain lacked the military forces to do anything about it.
The imposition of the Stamp Act put the British government on a collision course
When the Seven Years War with France had ended in 1763, the colonial leaders had expected that Britain would relax her control of the American colonies and that trade and settlement of the western areas would expand. The British government did not share this view and wanted to continue to maintain a military presence in the area and curtail any western settlement which might alienate the native Indians. Had the colonists agreed to share the burden of the cost of defence and frontier supervision a clash might have been averted but the imposition of a range of taxes concluding with the Stamp Tax of 1765 meant that the British government and colonial leaders were on a collision course.
The British government thought the rebels were bluffing
There was a strong feeling among the British government and its military leaders that the colonial leaders were bluffing and that a short war would bring the colonies back under the control of the metropolitan government. Although many of the hated taxes had been withdrawn by 1775 and there did exist representation for the colonists, the colonial leaders continued to resent British interference in their affairs. After a failed attempt to hold on to the arsenal at Concord, hostilities broke out and war was inevitable. A lack of British forces and the failure of the British to persuade the majority of the colonists to support Britain meant that it would be difficult to secure control of the colonies. 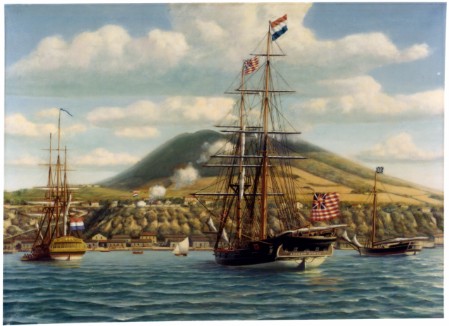 The arrival of the French fleet proved decisive
France joins in
When France threw her military behind the forces of the rebels from 1778 resulting in Britain now being involved in a global war, there was no possibility of British forces holding on to the colonies. A campaign was launched by Generals Clinton and Cornwallis to hold on to Georgia and the Carolinas but the arrival of a French fleet in the region in August 1781 meant that seaward supply routes for British forces were cut off. 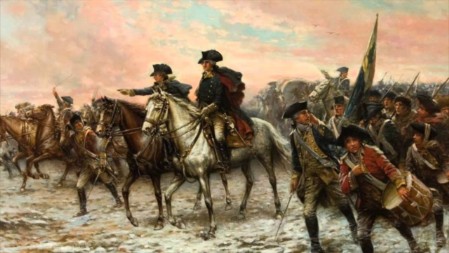 With Washington's forces blocking any landward retreat and the French navy blocking the seaward route, Cornwallis was trapped
With the French fleet blockading the coast around southern Virginia, Cornwallis found himself trapped by Washington's forces from the landward side and French forces from the sea. He had little alternative but to surrender and end British rule in the North American colonies. When Prime Minister Lord North resigned in March 1782 to be replaced by the more moderate Rockingham, peace negotiations began leading to the agreement signed at Versailles 1783.
Business and commerce flourished after the war
The end of British rule over the thirteen colonies did not mean the end of the British relationship with the USA or the end of the Empire as it existed then. The Empire had begun with private individuals and private companies seeking new sources of trade in the early c17th and even though the King was no longer the Head of the thirteen colonies, business and commerce continued and flourished. Exports of raw cotton increased from £15.5 million in the late 1780s to £28.6 million by 1800. Only the slave worked plantations could provide the cotton industry of Lancashire with the cotton it needed in the quantities it required. As the industrial revolution progressed in the early c19th and the cotton was produced in factories, the reliance on these slave worked plantations in the southern states of the USA increased. By 1840, 80% of Lancashire's supplies of cotton acme from the USA.
The end of the Mercantilist system
What was evident was that trade did not need government interference to allow it to flourish. The American Revolution coincided with the publication of 'The Wealth of Nations' by Adam Smith' who advocated policies of free trade and his ideas were slowly adopted by British politicians who gradually dismantled the restrictions on trade that were all part of the Mercantilist system. By the mid 1840s all the rules and monopolies of the Mercantilist system had been discarded and Britain's politicians and commercial leaders were committed to policies of free trade which led to Britain becoming the workshop of the world and an industrial dominance which lasted until the last quarter of the c19th.
Lessons learnt
As well as the loss of the American colonies leading to the adoption of free trade, the nature of empire changed as the lessons of government interference in colonial affairs were learnt and when the was the possibility of a similar revolution in Canada in the 1830s, the government decided to allow a measure of colonial independence that had not been countenanced before. The Canadian constitution proposed in the Durham Report that followed the troubles in Canada in the 1830s became the model for all the white settler colonies in the second half of the c19th. 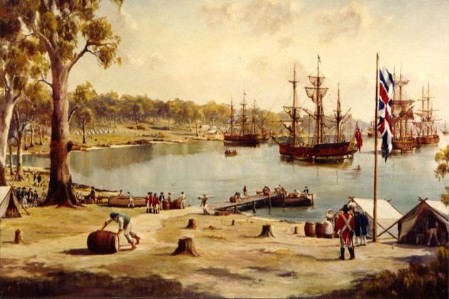 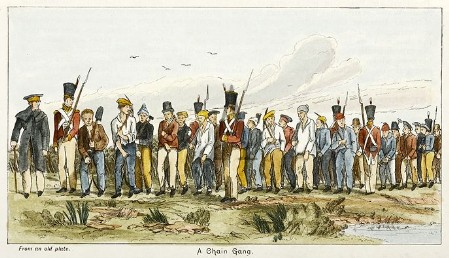 Some of the early convicts beign escorted by soldiers at Sydney Cove
A new colony for the transportation of felons sought
The main beneficiary of granting a greater independence to colonists was the Australian continent which itself had been annexed in a response to the loss of the American colonies. Transportation to the Americas had long been used as a way of dealing with convicted felons. It was seen as the answer the lack of prison accommodation in Britain and the means of providing a possible secure and better future for the convicts transported.
When the thirteen colonies were no longer available for the transportation if convicts, it came at the same time as Captain Cook annexed Australia. When Cook's botanist Banks recommended to the government that Australia was suitable for settlement and thus transportation of convicts, it opened the way for the development of a whole new continent.
Back to content