Go to content
The Discovery of Gold on the Witwatersrand 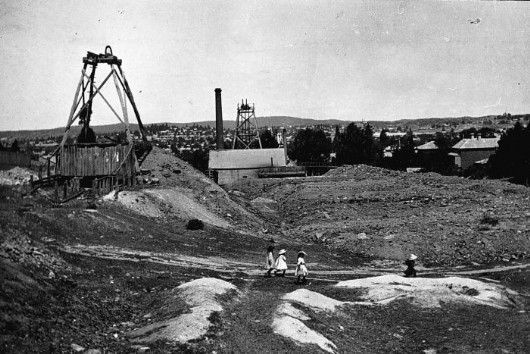 Gold changed the character of the Transvaal
The discovery of gold on the Witwatersrand in 1886 led to a series of events which changed the character of the young Boer republic and  changed forever the economic and political relations between Britain and the Boer republics and eventually led to the war of 1899. The 1886 discovery of gold ushered in an influx of largely British labour and capital which established an industrial economy centred on Johannesburg where the uitlander (foreigner) was soon seen as a threat to the Afrikaner way of life.
The ‘uitlanders’ soon outnumbered the Boers
By 1891 the number of whites in southern Africa had grown from the 250,000 that lived there in 1870 to 600,000 and the increase was largely the result of migrant miners . The mine owners wanted a government of the Transvaal sympathetic to their needs. The gold on the Witwatersrand was difficult to mine yet the price of gold was controlled and did not reflect the difficulty and expense of extracting it. Although the reefs extended 50 km along the rand and attracted miners from all over the world who worked alongside destitute Afrikaners and Africans, the quality of the gold was poor and lay in deposits thousands of metres deep. As huge amounts of capital were needed to extract the ore, the industry came to be run by a dozen or so 'Randlords' like Cecil Rhodes who brought his diamond industry expertise to Johannesburg. The owners of the deep mines wanted a government sympathetic to their needs for  low wages and easily available capital and resources like dynamite at a decent price  but President Kruger saw the Randlords and their European labour force as a threat to the way of life of the Boer. 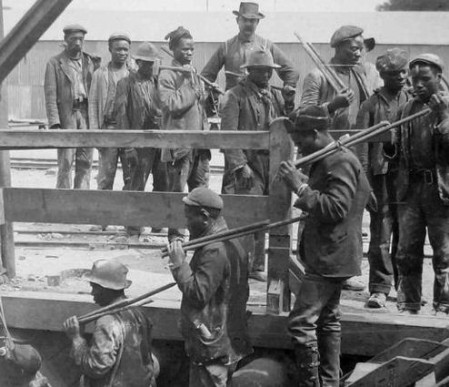 Deep gold mining, Johannesburg, c1900
President Kruger was determined to resist any change to the character of the republic
The British may have hoped that the influx of British labour would help bring about the collapse of the Transvaal but Paul Kruger, President of the Transvaal, was determined to resist any change to the character of the Transvaal. He resisted any moves to incorporate the 'uitlander' into the political community and saw the gold industry as providing the money to maintain the independence of the Boer republic. It was clear that by 1894 the Transvaal was not going to implode even though the Transvaal was going through an economic revolution that meant the pastoral community was being threatened by the gold industry that within its midst.
Kruger could remember the British annexation of the Transvaal in 1877
Kruger might well have sought a compromise with the Randlords, especially as those who operated low-level mines were generally on his side but Kruger made little attempt to reach a settlement with the industry. He feared the impact of immigration and industrialisation on Boer society and remembered the threat that Britain had posed in the past in 1880 and believed they continued to pose a threat. He did nothing to allow more Africans to move to the Rand. He maintained a government monopolies and placed heavy taxes on essential items like dynamite.  In 1890 he restricted the ‘Uitlander’ vote to men who had been resident in the Transvaal for fourteen years. It is doubtful that many British miners would have wanted to exchange their British citizenship for Transvaal citizenship but in making it more difficult for those who might have wanted to become Transvaal citizenships he handed an easy target to the British government who could claim that the British were being victimised.
Rhodes planned the overthrow of Kruger
The conflict between Kruger and the deep level Randlords led by Cecil Rhodes led to Rhodes planning a coup d'etat, the Jameson Raid,  which when it failed led Kruger to prepare for a war that he believed was inevitable to determine would rule in the Transvaal. Between 1896 and 1899 the Transvaal prepared for the' inevitable' war by acquiring some of the most modern weapons available. See
Back to content