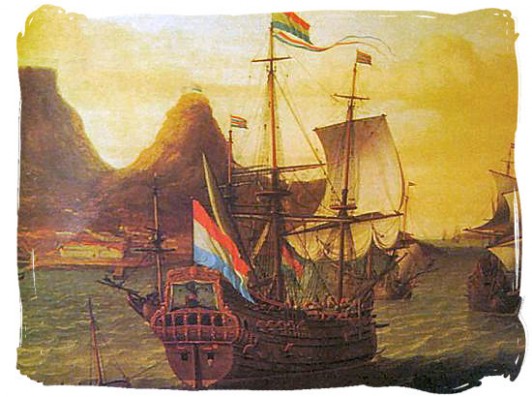 The Dutch Arrive
It was 1652 when Jan Van Riebeck of the Dutch East India Company arrived at the Cape of Good Hope to establish a provision station for the spice route to the Dutch East Indies. The intention was to establish a fort and a productive garden to provide fresh vegetable and fruit for the ships on the long journey to the Far East. There was no intention to settle the hinterland of the Cape and the Company ordered that there was to be only minimal contact with the local people -the Khoikhois.
By 1655 the fort had still not been built and there had been a succession of crop failures so that van Riebeck advised the Company that if the Company's servants were not allowed to become free men and establish their own farms in the interior the mission would fail. In 1657 nine burghers were given the right to settle on land close to the fort but to do this would mean taking land from the local people. Thus began the history of conquest and conflict with the African people. It wasn't long before these burghers decided to move further inland and become more independent of the Company. In 1658 the first slaves were introduced to the cape from the Guinea coast, Angola and Madagascar and by 1707 a census recorded 1,779 settlers  owning 1,107 slaves. Within a few years the settlers were calling themselves Afrikaners and speaking a creolised form of Dutch-Afrikaans.
As the settlement expanded the original Dutch settlers were joined by German settlers and later by French Huguenots. In the Cape as in other colonial societies there were no taboos against sexual relations between the races and liaisons between white masters and their African or Asian slaves produced the ancestors of today's Cape Coloureds. 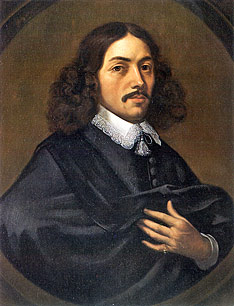 Jan Van Riebeck of the Dutch East India Company established a provision station at the Cape.
Of the settlers there were two types-the settler who remained close to the Cape and who grew wheat or wine and was relatively affluent and well educated. Then there was the trekboer who was  a migrant farmer who was geographically and spiritually isolated-an individualist who was guided by his faith in the Dutch Calvinist Church and believed he was superior to the native (kaffir). The trekboers survived as migrant stock farmers driving their cattle over vast distances and living out of their wagons. When and if they settled, the poor grazing land necessitated their having enormous farms of up to 6,000 acres. By the end of the 18th century settlers from Germany and Flanders,  and French Huguenots were part of this new people, the Afrikaner, all of whom had an adherence to Calvinist doctrines and a dislike of central authority. Being a white nation on a black continent they increasingly considered themselves the makers of their own destiny and when that position was to be challenged there was to be conflict.
English Annexation
In 1794 Holland was overrun by troops of the French Republic. In 1795, during the French Revolutionary wars, British troops arrived and took over Cape Colony from the Dutch to deprive the French of a strategic base. As part of the treaty of Amiens in 1802 the Cape became part of the newly created Batavian republic (successor to the Republic of the Netherlands) but in 1806 the British returned. At this time there were 26,000 Afrikaners in the Cape and almost equal number of Africans and Khoi-San. Many Boers simply moved further away from the British centre of administration but it proved difficult to ignore the British especially after 1820 when the British who had annexed the Cape in 1815 introduced 5,000 settlers in 1820.
These settlers were introduced to stabilize the eastern cape and intended to bring commercial farming to the region. The British notion of farming together with their more liberal attitude towards the keeping of slaves and the rights of blacks led to one of the defining events in the history of the Afrikaner nation-the Great Trek of 1836-38. 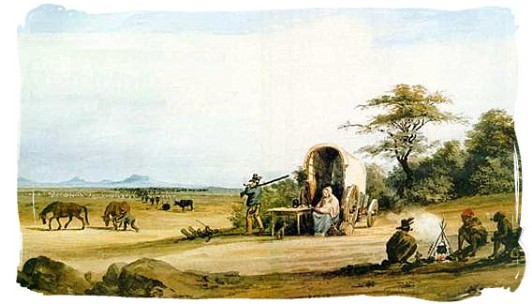 Dutch Settlement of the Interior
In 1833 slavery was abolished in the British Empire and this was the last straw for many Boers who considered the kaffir slave essential to the running of the farm. The number of actual slaves was small for the kaffir who did all the menial work essential to the running of the farm often worked in exchange for a piece of land or produce but the Abolition of Slavery was for the Boers an attack on their lifestyle and so from 1836 to the early 1840s between 12,000 and 14,000 Voortrekkers made the Great Trek north in search of a new life independent of the British. Having crossed the Orange River the Voortrekkers split into two- one group heading north into the Transvaal and the other group heading east into Natal.
Back to content