Rhodes was behind everything
In the short period of five and a half years between July 1890 and January 1896 Rhodes was one of the most powerful men in the world. He had established the International Diamond Syndicate that fixed prices and controlled the world's supply of diamonds. He had consolidated his interests in the Witwatersrand and built a second fortune in gold.  Having been granted a Royal Charter for his British South Africa Company he had occupied Mashonaland, waged war against the Portuguese and secured two of the three territories that Portugal had originally claimed. He destroyed Matabele military power, added Barotsland (Zambia) to his company's possessions, gained exclusive mineral rights throughout Bechuanaland and effectively secured Nyasaland for Britain.
He had linked his and Britain's African possessions by telegraph, pushed the railway line north from Cape Town to the Matabele frontier. Between 17 July 1890 and 12 January 1896 Cecil Rhodes was also running a country for he was Prime Minister of Cape Colony. 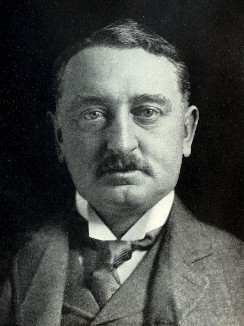 Cecil Rhodes, Prime Minister of he Cape Colony and head of the British South Africa Company, as well as gold and diamond magnate, wanted to desgtroy the Transvall state of Paul Kruger
He drew up a blueprint for Africa
As Prime Minister, Rhodes drew up a blueprint for a new South Africa-a plan devised by and for capitalists which planned to solve the nation's labour difficulties by confining rural Africans to tribal reserves and imposing a tax on every hut. To survive, Africans would have to enter the cash economy and sell their labour to whites. Together with these changes Rhodes imposed apartheid in the towns - non-whites now experienced segregation in schools, prisons, hospitals, theatres and on public transport. They were disqualified from jury service and removed in their thousands form the electoral rolls. One man though stood between Rhodes and the achievement of these grandiose schemes  -Paul Kruger. 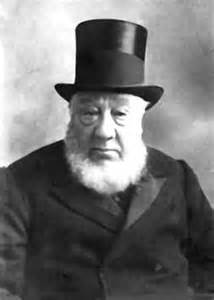 Paul Kruger
Kruger stood in his way
Cecil Rhodes and the British may have hoped that the influx of British labour would help bring about the collapse of the Transvaal but Paul Kruger, President of the Transvaal, was determined to resist any change to the character of the Transvaal. He resisted any moves to incorporate the foreign workers (uitlanders) into the political community and saw the gold industry as providing the money to maintain the independence of the Boer republic. It was clear that by 1894 the Transvaal was not going to implode even though the Transvaal was going through an economic revolution that meant the pastoral community was being threatened by the gold industry that was within its midst.
Boer society would be destroyed
Kruger might well have sought a compromise with the Randlords, especially as those who operated low-level mines were generally on his side but he made little attempt to reach a settlement with the industry. He feared the impact of immigration and industrialisation on Boer society and remembered the threat that Britain had posed in the past in 1880 (when the Transvaal had been annexed) and believed Britain continued to pose a threat. He did nothing to allow more Africans to move to the Rand. He maintained government monopolies and placed heavy taxes on essential items like dynamite.  In 1890 he restricted the Uitlander vote to men who had been resident in the Transvaal for fourteen years. It is doubtful that many British miners would have wanted to exchange their British citizenship for Transvaal citizenship but in making it more difficult for those who might have wanted to become Transvaal citizenships he handed an easy target to the British government who could claim that the British were being victimised.
Kruger had to be overthrown
The deep level Randlords under the leadership of Rhodes became convinced that Kruger's regime had to be overthrown. Rhodes had made his name and fortune in Kimberly, controlling 90% of the world's diamond industry before moving into gold. In 1890 he became Prime Minister of Cape Colony and used his position to advance the interests of industry. Rhodes came to use his wealth made from diamonds and gold to advance his imperial ideas. He believed that: "we are the finest race in the world, and that the more of the world we inhabit, the better it is for the human race. Just fancy: those parts that are at present inhabited by the most despicable specimens of human beings, what an alteration there would be if they were brought under Anglo-Saxon influence". Rhodes’ ideas were well received in Britain which in the 1890s was embracing 'New Imperialism'.
Transvaal with Germany could dominate southern Africa
European powers were engaged in a scramble to acquire new colonies, many of which were in Africa. One of Britain's main rivals in this competition to enlarge the Empire was Germany that already possessed South West Africa. Given the historical association between Germany and the Boers there was concern in Britain that Germany might seek to establish friendly relations with the Transvaal, especially as by 1895 there were over 5,000 Germans living in the Transvaal and formed a well established and prosperity pro Kruger community. A strong Transvaal with the support of Germany might come to dominate south Africa and become a threat to Britain's strategic position at the Cape.
Transvaal was becoming more independent
With the failure of Rhodes' scheme to find sufficient quantities of gold in Matabeleland and Mashonaland, Rhodes knew that his scheme for a Cairo to Cape Town railway as the precursor to a British dominated eastern and southern Africa depended on the destruction of the Boer republics. The Transvaal under Kruger was becoming more and more economically and politically independent. A railway to Delagoa Bay was opened up in 1894 obviating the need to use Cape Town for imports and exports. To make it more difficult for the Cape Colony, Kruger imposed steep haulage tariffs on the railway between Transvaal and Cape Colony and then blocked the use of the drifts across Transvaal territory.

An uprising of ‘uitlanders’ would bring a revolution
To achieve the destruction of the Transvaal, Rhodes planned an overthrow of Kruger's regime. Rhodes got enough assurances from Uitlanders to convince himself that it was possible to overthrow Kruger by an uprising of Uitlanders and then invite Britain in to provide protection. Rhodes believed he had sufficient support within south Africa - ghe was after all the Prime Minister of the Cape and in alliance with the moderate Cape Afrikaner party. He believed that the English community in Natal would support him and that he had the support of the British government. He had not been discouraged by Lord Rosebery whilst he had been Prime Minister and with Salisbury and Chamberlain he thought he had the full backing of the British government. 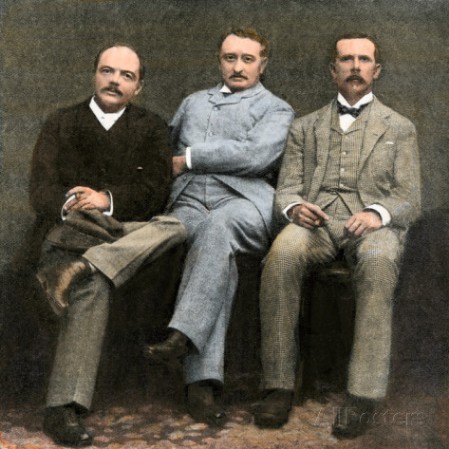 Jameson, far left with Rhodes, middle
Dr Jameson would lead the uprising
Led by Dr Leander Starr Jameson, a friend of Rhodes, a  raid into the Transvaal of 500 men of the British South Africa Police, began from Pitsani on 31 December 1895.  He had originally hoped for nearer 1500 men so the force was totally inadequate for the task in hand. After four days of slow progress Jameson found himself close to a farm called Doornkop, just a couple of hours from Johannesburg. The force had been harried for two days by Boers they could not see and when Jameson realised that the hoped for uprising in Johannesburg was not going to materialise someone raised a white flag. The force had suffered sixty five men killed and the remainder were to be arrested by the Boers and sent to the British who tried and sentenced them. The raid was a fiasco from the beginning. The men were not equipped at all for the type of enterprise that they were engaged in and the hoped for uprising in Johannesburg did not materialise. Rhodes realised the raid was doomed but his telegram urging Jameson to postpone the mission was ignored.
Jameson arrested
The failure of the uprising had huge implications for all those involved. Rhodes was forced to resign as Prime Minister of the Cape and had to give up his position in the Chartered Company which controlled Rhodesia. Jameson was eventually tried in England and sentenced to 15 months imprisonment.  In England there was outrage at what people believed was Britain's involvement and a Committee of Inquiry was set up but the British establishment closed ranks and the involvement of Chamberlain was suspected but never proved. The raid had international repercussions at a time when Britain was diplomatically isolated. She was heavily criticised by her Imperial rivals France and Russia, and the Kaiser sent a telegram to Kruger congratulating him on the success with which they had dealt with the threat to their independence.
Kruger was a hero with his people
The Jameson Raid convinced Kruger that a war with Britain was inevitable if the Boer way of life was to be preserved. Rhodes may have underestimated the strength of the support he had this time but Kruger knew that a conflict with Britain over who ruled south Africa would come sooner or later. The raid had made Kruger a hero with his people and united them behind the aging president. The raid also ignited the patriotic fervour of the Boers of the Orange Free State and their President Steyn was now feted by Kruger. 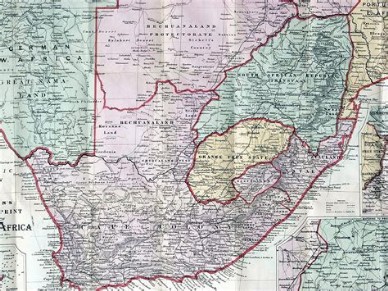 South Africa at the time of the Jameson Raid 1895
A new Boer army  with modern equipment
In the years following the Jameson Raid, Kruger re-equipped the Boers, at a cost of £1 million, buying 37,000 Mauser rifles from Germany which were given to every Boer commando. As well as equipping the citizen army, 22 pieces of modern artillery were bought from France and Germany.  A  citizen army of commando units was organized with a force of 25,000 fighting men - much more than the British had in their colonies of Natal and the Cape Colony. Having rearmed and gained important allies as well as the support of the Boers of the Transvaal, Kruger was prepared if necessary to take on the British. He would not have to wait long.
Back to content