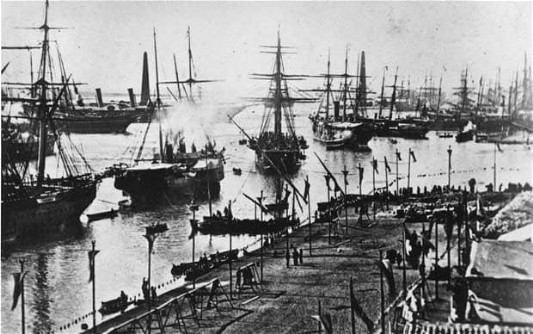 The Opening of the Suez Canal
India’s lifeline
In  1869 the Egyptian-French financed Suez Canal was opened. Little interest in  the project had been  taken by the British but when opened it was realised that it shortened by some considerable distance the journey to India. The distance  around  the Cape to Bombay was 10,450 miles but just 6,000 miles through the canal. The opening  of the canal increased the  need for Britain to remain the dominant power in the Middle East as it was  now India's lifeline.  The Middle East became henceforth a major focal point of British interest.
Right: Victory at the Battle of Tel-el-Kebir gave Britain control over Egypt 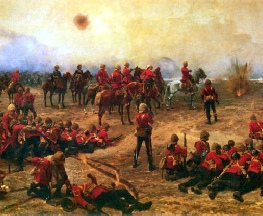 Above left: The route to India was 5,000 miles shorter via the Suez Canal
Above right: The Suez Canal linked the Mediterranean to the Red Sea 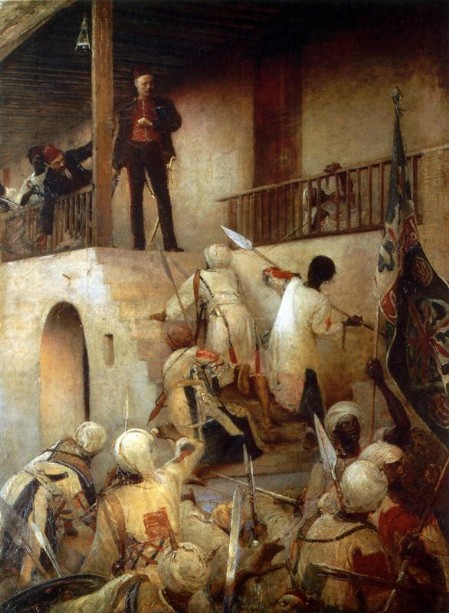 The Death of General Gordon
Wolseley's advance was  cautious but an  advance column crossing the desert was brought to battle at Abu Klea where in a short battle lasting twenty minutes they suffered heavy losses with the  red square pierced but the Mahdist forces were driven off. The relative success of the Mahdist forces in  the desert encouraged the Mahdi to storm Khartoum which was taken on 28 January with Gordon killed in the fighting. The more romantic story of Gordon dying on steps was the result of  unreliable sources but  because it was regarded  as a fitting end for a Christian soldier  it was the version that became part of history.
The Fashoda Incident  brought Britain and France to the brink of war
The Mahdi died a few months later and the Sudan was to pose little threat to Egypt in the following  years. The Sudan and the headwaters of the Nile were to be an area competed for by Britain and France as Britain was concerned  that Egypt's agriculture might be  affected by any power controlling this area. Britain claimed the area by virtue of its position in Egypt but this was challenged by France in  1898 when the French sent a force under the command of Captain Marchand  to Fashoda on the shores of the Upper Nile.
Left: The Death of Gordon as portrayed by George Joy's 1893 painting
Captain Marchand had crossed the African continent from Brazzaville to Fashoda  in a journey lasting 18 months. He then claimed Fashoda on behalf of France at a time when General Kitchener was in Sudan to quell an uprising. Kitchener claimed that the whole of the Sudan, including Fashoda, lay under  Britain administration. There was a stand off until Salisbury put the Royal Navy on alert and the French accepted Salisbury's demands and withdrew Marchand. France renounced all claims to the Nile valley and the area remained under British control the more so following Kitchener's defeat of Sudanese forces. The British government had previously sanctioned the retaking of the Sudan by a force commanded by Kitchener. Kitchener advanced slowly down  the Nile using a railway that  was constructed as they went. As the force got closer to  the Khalifah's army of 60,000, British troops were sent out. 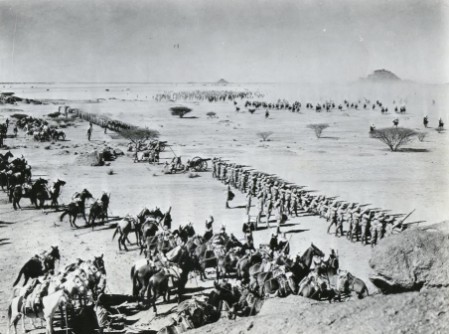 The Battle of Omdurman
The decisive battle was fought on 2 September 1898 on  a plain near  Omdurman. The Khalifah's army made a  series of frontal attacks which were beaten off with long range rifle fire, machine  guns and  artillery which together  killed 11,000 men and wounded a further  16,000. It was a massacre which showed the difference between European  armies and native forces. Many of the Khalifah's leaders were summarily shot leading to MPs in the House of Commons demanding  that Kitchener be denied his  payment of £30,000 - his reward for Omdurman.
Britain the dominant power in the Middle East
With the defeat of the Khalifah's army and the settlement with the French following the Fashoda incident Britain remained the dominant European in the region and made all the more powerful after WW1 when the Ottoman Empire collapsed. The seaward route to India and the Far East through the Mediterranean and the  Suez Canal was now well protected by a string of British territories (Gibraltar, Malta, Cyprus, Egypt and Sudan) and would remain so until threatened in WW2 by the airpower of the Axis forces.
Right: The Battle of Omdurman
Back to content